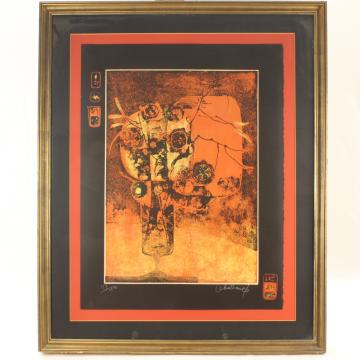 Bio: Lebadang Hoi (b. 1922, d. 2015) was born in Vietnam and emigrated to France in 1939 to study at the Ecole des Beaux-Arts in Toulouse. He first gained prominence throughout France and Germany and then to the attention of Americans in 1966 when the Cincinnati Art Museum hosted the first one-man exhibition of his paintings in the United States. In his work Lebadang fuses the cultural interests of the Orient and Europe, creating graceful imagery in infinite variations of line, shape, and color. Lebadang is recognized as an accomplished printmaker, having worked extensively in the media of etching, lithography, and serigraphy. "Lebadangraphy" is his invention whereby he achieves harmony with a minimum of colors, using the same silkscreens several times. His work is in the Rockefeller Collection and the Phoenix Art Museum, among others. Most of Lebadangs lithographs have embossing and a Circle Fine Art Chopmark.

Shipping Notes: Ships for Free without Frame as a Flat Parcel Only.