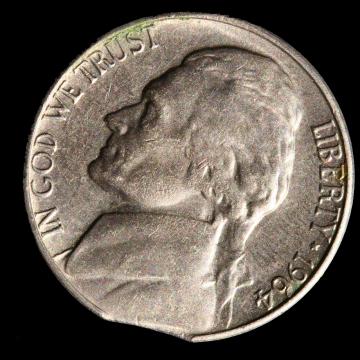 This item has been viewed 671 times
1964-D Jefferson Nickel, Curved Clipped Planchet - Auction ID: 2184
Ask a Question | Send to a friend | Add to your watch list

Error: A curved clip is generated when a punch (blanking die) overlaps a previously-punched hole in the coin metal strip.  The resulting blank ends up with a concave deficit.  It is believed that a failure  for the coin metal strip to advance properly through the blanking press is the root cause of this planchet error.

Grading Comments: VG-10 - Considerable wear has flattened most of the fine detail. Design detail is still heavily worn but the major devices and lettering are clear. Most lettering remains readable. Unless a grading services such as Professional Coin Grading Service (PCGS) or Numismatic Guaranty Corporation (NGC) is stated in the auction description as the source of an items grading, GoodLife Auctions uses its own good faith, contemporary grading standards and interpretations to grade stamps, coins and currency. Please note all grades are subjective and buyer should make their own visual inspection and determination about the accuracy of grading. See our Auction Terms of Sale for more information regarding grading - no returns are accepted for ungraded coins or grading inaccuracies.